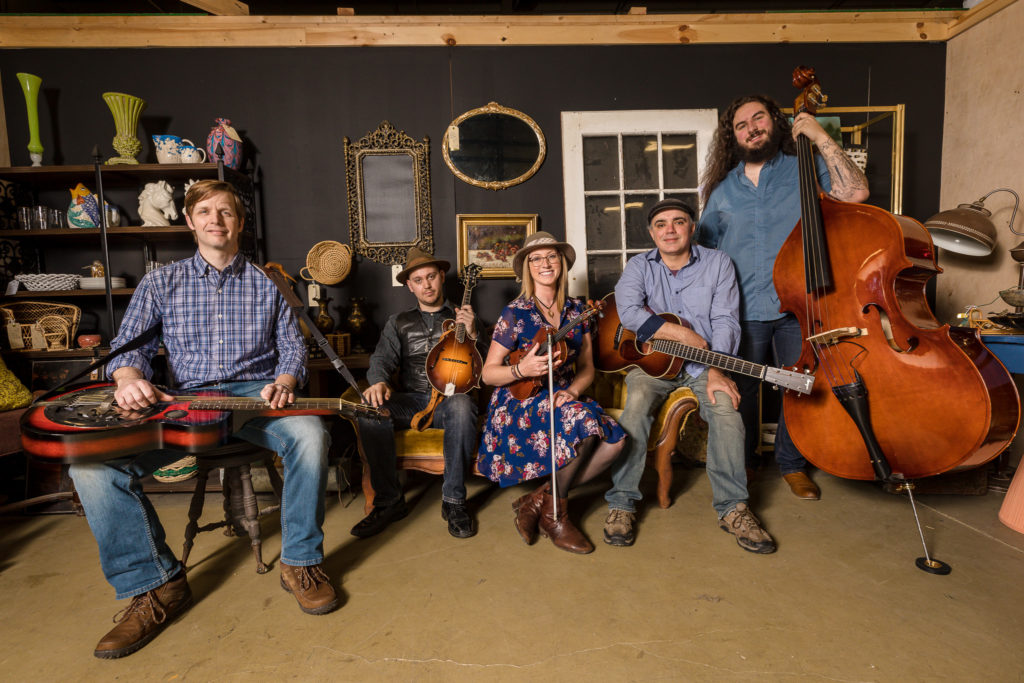 Select your desired table from the map below, one ticket reserves the entire table. Red marks around tables notate the number of seats at each table.https://www.jakobsferry.com/  Hailing from the mountain towns of Pennsylvania, West Virginia, and Maryland, The Jakob’s Ferry Stragglers draw freely from Old-Time, Bluegrass, Rockabilly, and Swing music to create their own brand of high energy, Appalachian Bluegrass. Gary Antol (guitar/vocals) and Libby Eddy (fiddle/vocals) founded the band in 2014 with a very simple goal: write good songs, honor the music, and take it to the road. In the time since, Jakob’s Ferry Stragglers has performed in clubs across the country and appeared at festivals including Delfest, Grey Fox, Delaware Valley Bluegrass Festival, and many more. The Jakob’s Ferry Stragglers are: Gary Antol Vocals/Guitar Libby Eddy Fiddle/Vocals Ray Bruckman Mandolin/Fiddle/Vocals Niko Kreider Upright Bass Jody Mosser Dobro/Vocals

Select your desired table from the map below, one ticket reserves the entire table. Red marks around tables notate the number of seats at each table. http://www.firesidecollectiveband.com/https://www.facebook.com/FiresideCollectiveBandhttps://twitter.com/FiresideFolk Quickly blazing a name for themselves with their progressive approach to American folk music, Fireside Collective delights listeners with memorable melodies and contemporary songwriting. Formed in the mountain city of Asheville North Carolina, the band plays original songs on stringed instruments, intended for a modern audience. Following the release of their debut album “Shadows and Dreams”, the band hit the road seeking to engage audiences with their energetic live show built on instrumental proficiency, colorful harmonies, and innovative musical arrangements. Well what do you call it?   “Bluegrass, Newgrass, perhaps Progressive folk…” These are some descriptions mandolinist and songwriter Jesse Iaquinto chooses to identify with. “Depending on where you come from and your experience with folk music, you may think we’re very traditional, or on the other hand, consider us a progressive act. We appreciate both ends of the spectrum and may lie on a different end on any given night.” While roots music lies at the core of the Collective’s songs, a willingness to explore the boundaries and present relevant new material remains fundamental.   The band burst onto the scene in early 2014 following the release of “Shadows and Dreams.” The album weaves bluegrass, funk, rock, and blues influences into a refreshing representation of modern folk music. From the opening track “Poor Soul” with it’s energetic bluegrass overtones to the closer “Shine the Way Home”, the album takes listeners on a journey through simple love songs to complex themes such as metaphysics and coexistence. The album, recorded in Asheville at Sound Temple Studios, features guest musicians from Asheville’s rich acoustic music scene alongside members of the Fireside Collective. 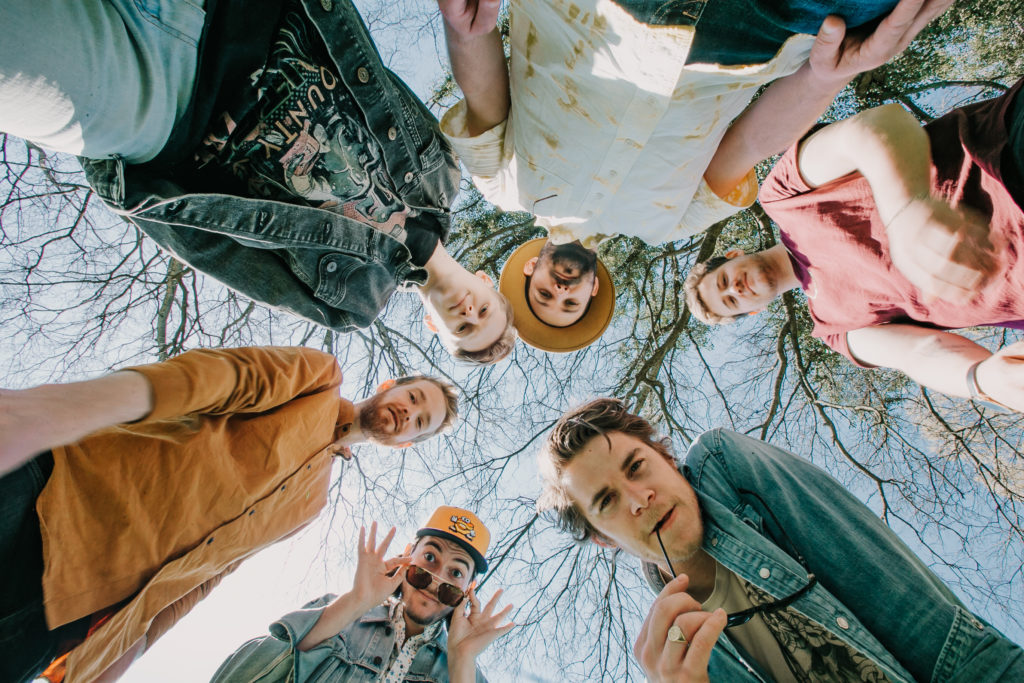 Select your desired table from the map below, one ticket reserves the entire table. Red marks around tables notate the number of seats at each table. A six-piece ensemble from Nashville, Tennessee, Waker’s sound spans the American musical spectrum. The group combines the spirit of classic rock, the pathos of Motown soul, the restless experimentation of jam-band music, and the songwriting acumen of the best indie rock. It’s this unique sound that’s earned them slots on stages at Bonnaroo, Hangout, and SXSW.Waker will release their debut album, Fresh Out, May 7th with Jullian Records and produced by Lincoln Parish, formerly of Cage the Elephant. 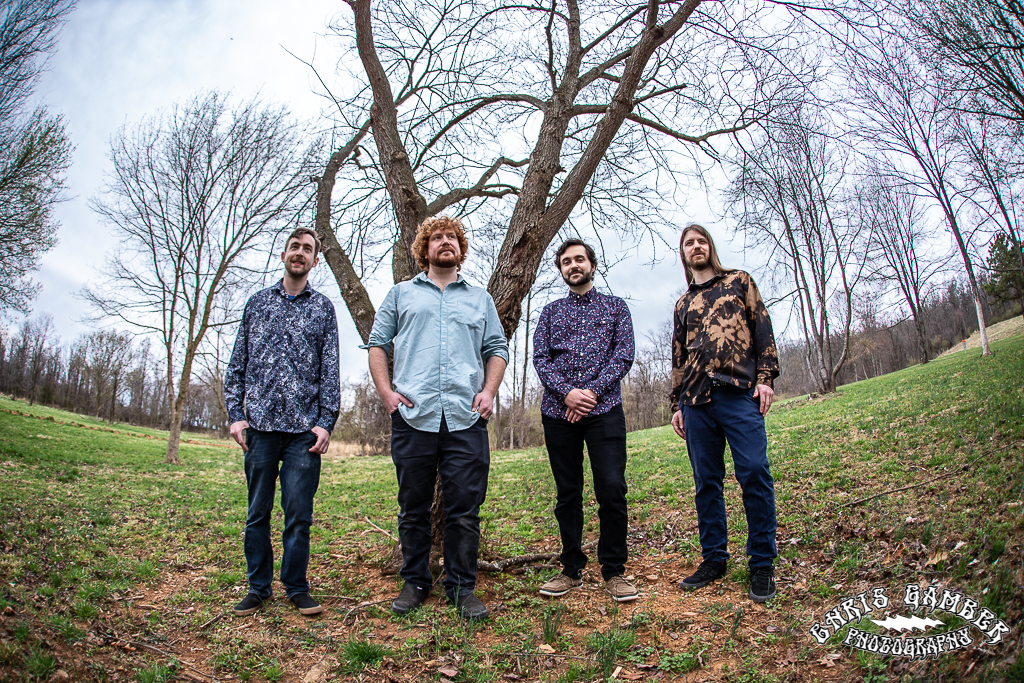 WEBSITE I FACEBOOK I INSTAGRAM I YOUTUBE I SPOTIFY (NEW ALBUM) Live Video: “Crossing County Lines”  The Dirty Grass Players, a four-piece new-grass band from Baltimore, is known for having one toe-tappin’ foot in traditional bluegrass while pushing boundaries with their blazing musicianship. Composed of Connor Murray on bass, Alex Berman on vocals & banjo, Ben Kolakowski with the guitar & vocals, and Ryan Rogers on mandolin, they have been bringing their growing fanbase a down and dirty performance for over five years. Their ability to seamlessly transition from down-home bluegrass to spirited improvisation makes each performance unique. Mix in some Allman Brothers, Pink Floyd or a dash of southern rock and you’ll quickly understand what they mean by “Dirty Grass”.  Entering into their seventh year together, The Dirty Grass Players just released their 2nd studio album, “Beneath the Woodpile”. Put together with alluring harmonies, lyrics, and melodies, the band presents a sound precisely at the crossroads of traditional and progressive bluegrass. This isn’t just another run-of-the-mill bluegrass album or band; it’s cathartic and dirty grass. Select your desired table from the map below, one ticket reserves the entire table. Red marks around tables notate the number of seats at each table.

Woody Woodworth and the Piners 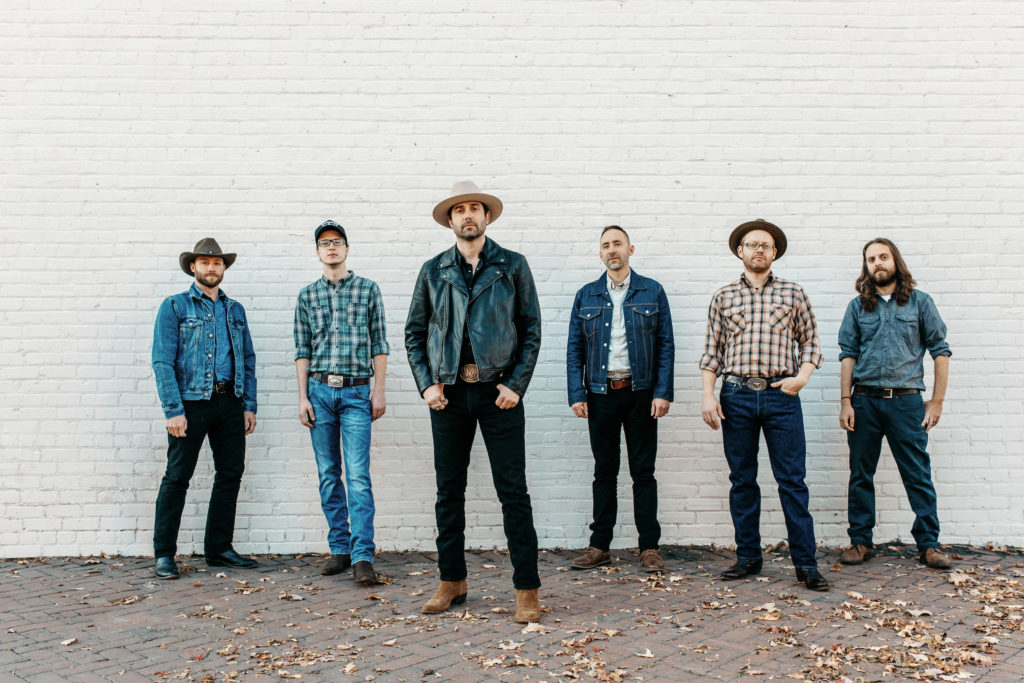 Hailing from Richmond, Virginia, Woody Woodworth & The Piners are part of the newest revival of Virginia music. Established in 2016, the Piners are named for the bygone expression to Pine – a deep longing for something or someone.  Influenced by Virginia’s deep musical history and Appalachian culture, Woody Woodworth & The Piners fuse storytelling with country, bluegrass, and rock and roll to create a sound that can be described as Appalachian Alt-country with a steady shot of southern rock and roll.   …like Hank Williams driving down an open highway in a ‘69 Chevelle blasting “Tuesday’s Gone…” Woodworth’s down-home stage presence and honest vocals are backed by a no holds bar honky-tonk twang, lonesome harmonica, sawing fiddle, and driving rhythm section that draws you in and leaves you longing for a time not forgotten.   Woodworth, a Virginia native, was born and raised in working-class family where music was an integral part of daily life. At an early age, he was introduced to the sounds of Dolly Parton, George Jones, Merle Haggard, Wayland Jennings, and Johnny Cash through his beloved grandparent’s obsession with the Grand Ole Opry and country music.  Woodworth became intrigued by regional tales woven into the music, and started writing his own songs at the age of twelve. His mother, a self-proclaimed “southern-rock-hippie,” educated him on sounds from the late 60’s and early 70’s and introduced him to the best of Bob Dylan, Neil Young, Charlie Daniels, The Allman Brothers, Marshall Tucker Band, and Lynyrd Skynyrd among many others.  As a songwriter, Woodworth embodies the heart of Appalachia with his haunting melodies and tales of love, loss, and the American spirit. Woodworth writes songs of the blue-collar working class that are easy on the ears and heavy on the heart.   Woody Woodworth & The Piners released two singles in 2020, Cherokee Maggie and Long Way Down, and a full-length live album titled Live at Richmond Music Hall. The band is set to release its second studio album in 2021.  Select your desired table from the map below, one ticket reserves the entire table. Red marks around tables notate the number of seats at each table. 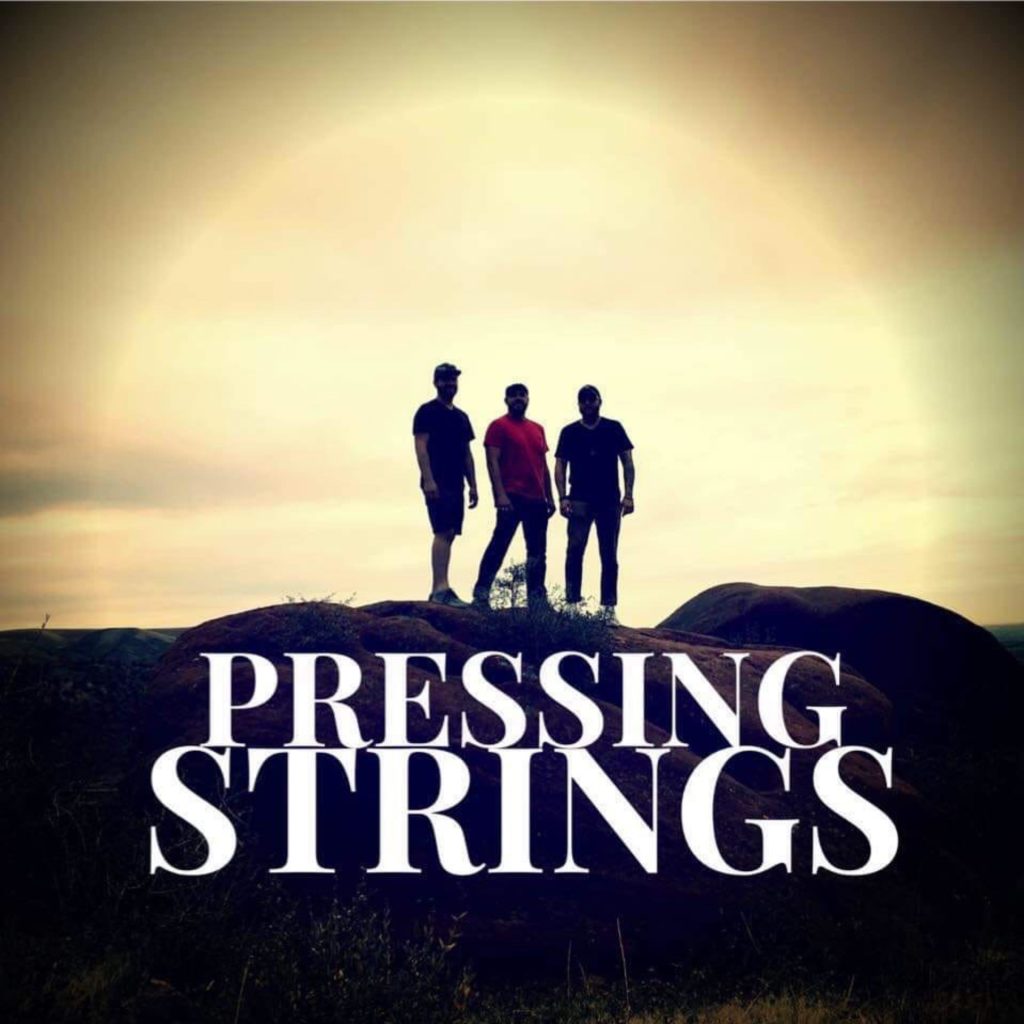 Select your desired table from the map below, one ticket reserves the entire table. Red marks around tables notate the number of seats at each table. What’s in a band name? A little or a lot, depending on how deeply you want to go. For Annapolis, Maryland-based trio Pressing Strings (Jordan Sokel: Guitar/Vocals, Nick Welker: Bass, Brandon Bartlett: Drums), the guitar guy is outnumbered by the rhythm section, but it all started back when Sokel, as a kid enamored with Dylan, Marley, Strummer, Simon, and Withers, learned to simultaneously play guitar and sing his favorite songs.   Then, guitar in hand, the songwriting bug took hold.   Cutting to 2014, with the current line-up firmed up, the band got to work developing its fanbase in the mid-Atlantic with shows from Pennsylvania to the Carolinas, then headed into the studio to record its Owe The Source album, released in 2015. Not easily tagged, genre-wise, the album deftly mixed a thoughtful soulfulness with union hall rock and roll, and they returned to the road to show it all off everywhere from VFWs to festivals. Rejuvenated from the band’s new energy, the band linked up with Grammy-winning producer/engineer Scott Jacoby (Coldplay, Vampire Weekend, Ronnie Spector) and headed to upstate New York to record Most Of Us. Following that album’s 2016 release, the band then toured coast-to-coast with power-pop songstress Rachael Yamagata in 2017, along with its own headlining shows along the Eastern Seaboard through 2018. The singles “Brave,” “On The Wire,” and “The Madness” led up to the release of the band’s latest album, Settle In, which was released this spring. The band is now hunkered down writing and demo’ing for its next project. Website: https://pressingstrings.com/ Spotify: https://open.spotify.com/artist/26ZMJzyOeTTQzwImKFsKHR?uri=spotify%3Aartist%3A26ZMJzyOeTTQzwImKFsKHR&utm_source=embed_v2&go=1&play=1&nd=1   Apple Music: https://music.apple.com/us/artist/pressing-strings/301906934   “Brave” video: https://www.youtube.com/watch?v=opTnUUon1Wc   “Always Around” video: https://www.youtube.com/watch?v=jcTJHh5EZko   “Most Of Us” video: https://www.youtube.com/watch?v=yJas8SIMxCo   “It’s Better Now” video: https://www.youtube.com/watch?v=5BKKa8wiJDU

TO RECEIVE THE LATEST INFO